One of the key, stated motivations driving liberal transactivists is to end unjust violence and discrimination inflicted on a marginalised group: violence that should never be condoned. Many transactivists I know are community-minded liberals who want to make life easier for a minority group suffering discrimination – and that is fair enough.

I would be on board with this campaign, too, if it was not in actual fact so clearly focussed on attacking women; and if it did not pose such a huge, persistent and aggressive threat to women. Transactivism has to date been so effective in its silencing and bullying of women too, at taking down feminists whatever their public profile, that it also reveals itself as something much bigger and more sinister than a grassroots movement based on solidarity.

It also makes no sense to attack women, and feminists, if your ultimate concern is with gender-based violence. Feminists have been speaking out about rape, child marriage, sex trafficking, domestic abuse, witch hunting, female genital mutilation and gynocide; discrimination in education, politics, the workplace and the legal system; pathologisation, conversion therapy and abuse through the medical establishment; forced surrogacy, the criminalisation of abortion, miscarriage and self defense; the promotion of violence through objectification in media, eating disorders, self-harm and dysphoria, and more, for a very long time. To shut down feminists who have analyses about how these forms of oppression co-exist is counter-productive to any effort to end gender-based violence. It is also pure misogyny.

As Jonah Mix points out,

Women commit perhaps one-tenth of all murders, and less than one tenth of one percent of all mass shootings. When one removes from the pool of killers all women who struck back against abusive strangers and partners alike, only to be punished for their self-defense, the number drops further. To deny the specifically male nature of atrocity is to fool oneself.

So it seems highly suspect that a movement claiming to want an end to gender-based violence should train its eye so consistently on the very people who have been victim to it, and speaking out against it, for so long. This would also seem to be contrary to the aims many activists claim to have.

The no-platforming of feminists taking place internationally at the moment is vicious, unrelenting and not to mention – embarrassing and vacuous, and we need to stop imitating it in New Zealand. Here, I wish to introduce some of the people who have been victim to this no-platforming craze. Recognising who these people are should make us ask ourselves some questions about who really benefits from their silencing; how grassroots and community-minded transactivism really is, internationally; and what our personal relationship is to it.

Julie Bindel is a staunch lesbian feminist to whom we all owe a debt for her incredible work as a writer, activist and organiser, begun in the 1970s. She has also spent countless hours on helplines since then, as part of her work supporting lesbians to come out in the anti-gay climate of the Thatcher era. She also founded the organisation Justice for Women, which advocates for women in the face of self defense criminalisation. She is scheduled to talk about her life on February 4 this year, at the Working Class Movement Library in Salford. She is being shut down by a mob of transactivists hurling abuse and insults she is courageous to withstand.

I met MaryLou Singleton last September. Singleton has been a midwife for over two decades and a reproductive rights advocate for as long, and she also served on the board of directors for the Midwives Alliance of North America (MANA). Singleton opened my eyes to a practice that the second wave feminists used, called menstrual extraction. It’s a skill that women can cultivate in groups to ensure that sisters will always have access to early term abortions, even when clinics are shut down left, right and centre. Singleton also is the first person I’ve heard speak powerfully on home birth from a feminist perspective. She is a herbalist who believes in women’s health in women’s hands – a stauncher, braver sister is not to be found.

Singleton has been abandoned by her midwives’ association, since she objected to MANA buckling under pressure placed on them by the trans lobby, and removing all references to “women” from their advocacy and documentation. Transactivists often emphasise the dehumanising potential of language. Yet women are expected to accept being referred to as “menstruators”, with “front holes” instead of vaginas. Because Singleton rejects this and can also contextualise this pressure within a history of witch hunting and abuse through a male dominated practice of gynecology, she has been no-platformed and bullied incessantly.

So far, we have a hard-working herbalist midwife, and a journalist who founded a Justice for Women organisation who has spent her life answering calls on helplines. At what other “violent” feminists should we all be throwing stones?

Thistle Pettersen is another woman I met last year. She is a feminist singer-songwriter, environmentalist and radio broadcaster who used to volunteer for WORT 89.9FM, a radio station in Wisconsin. In late 2015, Pettersen did a live interview with feminist Sheila Jeffreys, and later aired a 58 minute radio documentary about the last MichFest (MichFest was an annual women-only festival that has now been shut down). Transactivists complained at the station and Pettersen was banned from the premises. As is typical, this no-platforming came with its share of abuse: Pettersen received death threats, and she also received an anonymous package in the mail containing human faeces.

Last year, I was personally banned from the Wellington Zinefest because I am a feminist blogger. The Zinefest has not responded to my, or any other letters asking them for more information, or expressing upset, about the ban. This hit-and-run style maneuvre is also characteristic: transactivists often do not feel their no-platforming of women requires any explanation or accountability. My job was targeted following the Zinefest ban, while one transactivist who is also “community liaison” for the New Zealand Prostitutes’ Collective (NZPC) launched an online bullying pact against me. I was forced to resign from my job in the midst of this.

This transactivist, Ahi Wi-Hongi, then moved on to another target: ni-Vanuatu activist and academic Pala Molisa. Molisa’s work involves continuing the legacy of his late mother, Grace. Her and Molisa’s father Sela were instrumental in Vanuatu’s independence struggle throughout the 1970s. Grace’s feminism was shaped from very early on, as she grew up in the matrilineal society and culture of Ambae.

Molisa has worked tirelessly to rebuild links between Maori and Pasifika; raise awareness of genocide in West Papua, and support feminist struggle for several years. He also works with a Naenae College rugby league team regularly, helping them to imbue their school life and training with a spirit and awareness of Pacific resistance struggle.

Molisa has barely spoken about gender identity politics, at all. Yet attacks are now being made on his job (see the image adjacent) as well as speaking engagements, on the basis of critiques he has shared on social media.

To attack Molisa is to attack a voice continuing an intergenerational legacy to make huge strides in discussions on indigenous rights and colonisation in New Zealand and the Pacific.

Who else is being targeted by this lobby? There is an extensive list here, but another recent example is Meghan Murphy. Murphy is a writer who runs Feminist Current, perhaps the only online news source that is fully run and funded by women, for women, and has no sponsorship that can compromise its feminist objectives and critiques. It too, was shut down on Thursday 12 January by transactivists, doing the patriarchy’s work for it, with absolutely nothing articulate to say about their objectives.

As George Orwell wrote in the novel 1984: “Orthodoxy means not thinking – not needing to think. Orthodoxy is unconsciousness.” 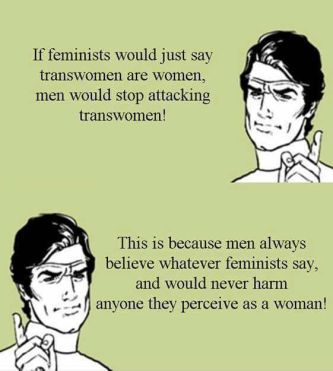 These transactivists seem to operate on the completely unthinking notion that feminist critiques of identity politics motivate male violence. As if male perpetrators of violence learn to be abusive by listening to herbalist midwives, or feminist community radio, or by reading Meghan Murphy or Julie Bindel or feminist zines, or studying with a Pacific academic whose critiques of colonisation are inspired by his mother, a woman raised on the island of Ambae.

Feminist writing and midwifery are not the kinds of activities that motivate male violence, as if that needs explaining.

This no-platforming is frightening, the reason why should be clear from my description of what these feminists contribute to women’s movement. One thing all of these feminists do is create and contribute to feminist media in a world where most media is totally male owned and controlled. In a Trump-era where women and women’s rights are increasingly under attack. Anyone who tries to shut them down is not a feminist, by any stretch.

I’d like us in New Zealand to be more concerned about these movements. I’d love groups like Ace Lady Network to show some concern about this kind of thing. The attacks made on Julie Bindel, MaryLou Singleton, on Thistle Pettersen, Meghan Murphy, Pala Molisa, myself and countless others, are a threat to all women’s media, to women’s rights and to all women. We need to be concerned, and transactivists here in New Zealand should take a long, hard look at what is going on, who is behind it, and what they’re really aligning themselves to.

By its rapid growth, government and corporate funding, increasing presence in schools and media; influence on policy on issues from bathroom laws (which Donald Trump supports) to birth certificates, from sports participation to media reporting, reproductive health advocacy and access to women’s spaces – it’s clear that transactivism is not grassroots. That is one reason it needs to be considered critically, rather than advocated unthinkingly.

If you are a genuinely community-driven transactivist, please consider whether the wider movement and its targeting of women truly represents your own aims.

Do you celebrate when people born male can be recognised as women, and celebrate their womanhood in its full glory? Right – do you also celebrate when women are referred to as “menstruators” by the very reproductive health organisations they fought to establish? When Trump and Caitlyn Jenner pat one another on the back? Do you celebrate at the thought of nurses referring to a woman’s “front bottom” while she is giving birth? How about when lesbians are called bigots for not wanting penile penetration? It is progress when male violence is reported in the media as having been committed by females – for instance in this case of a recent axe attack in Sydney? Is it not of concern that this distorts the discussion of male violence that women need to have? Is it only right to you, when young girls – the very girls we are trying to teach about “consent” – are demonised for expressing concern about seeing male genitalia in their own changing rooms? Do you cheer watching the hard-won feminist struggle for safe female only spaces put into reverse? And first pump when males who identify as women dominate in women’s sports, which are still under- represented, supported and funded in preference of men’s? Is it fine that the transactivist movement tends to ignore critiques of the medical establishment practices it advocates, from detransitioners who’ve been there? Doesn’t this movement pride itself on amplifying marginalised voices?

If you celebrate all of these “triumphs”, you may want to consider calling yourself a men’s rights activist.  If you can see why these things might be problematic – then please, stand up for free speech when lobbyists who do not care about women – attack and no-platform feminists. This craze is embarrassing to watch unfold in the U.K. and the States – we do not need it in our midst as well.

We need to talk about gender-based violence – and for that we need feminist voices.

If you liked this article feel free to leave a tip.