Join Waitlist We will inform you when the product arrives in stock. Please leave your valid email address below.
Skip to content

This year, I’ve been at Te Papa on four separate occasions, to respond to the position on militarism in the Pacific implied in the Gallipoli: The Scale of Our War exhibition. On February 4, Dr Pala Molisa and I dropped a banner that temporarily renamed the exhibition. In April, we went to chalk some messages outside the entrance, questioning Te Papa’s noise about Gallipoli in the face of its silence on genocide taking place in the Pacific today. On ANZAC Day, Peace Action Wellington attempted to install a card and plastic sculpture of Archibald Baxter on one of the flagpoles outside the museum, and I went along. Another time I went to write an essay.

The result: two threats of arrest and a deafening silence.

The banner drop was no minor undertaking: we purchased eight lengths of calico, and asked a diligent seamstress to sew them together to a square in a room too small to fold up the result, which was bunched up and driven to a signwriters’. There, it was attached to a mile high wall from a tall scaffold. A projector, perched outside the rolling workshop doors on top of a van for extra distance, gave us the image to trace and paint – the image that was made with measurements estimated from photographs and body height comparisons. Once the banner was done, we had to experiment with folding techniques for quick ejection from a tramping pack. We shook and dragged out the banner to stretch pavement to pavement across an empty road at night, before folding it up tight for a February 4 release. 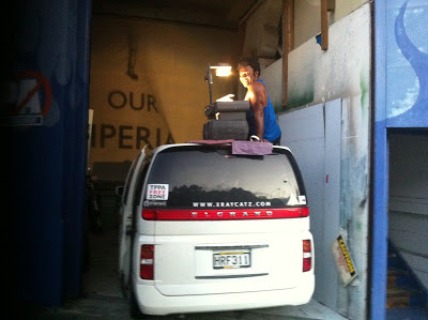 On the day of action, we hiked up to the Treaty of Waitangi display on Level 4, and considered Foucault’s panopticon as we looked for a place to yank a sixteen-metre square sign quickly from a pack and go unnoticed. There is nowhere to hide at Te Papa, or be unexposed for long – lucky we had a bit of a secret weapon around, a friendly friend with a bit of a gift for the gab.

We found a nook in the Passports show to kneel and hoist out the calico, before traipsing it to the balcony railing atop Gallipoli’s massive signage, and heaving our new suggested exhibition title, complete with image of Archibald Baxter, over the top of it. We think this new title tells a much truer story of the nature of World War One, and we’re glad it substituted the regular title, if only for a few minutes.

That day, security were polite – they were lovely. Not a peep from the museum about the event though, not a whisper. Even One News has removed its article, adapted from our press release, from their website.

The next time we returned for discourse, security were much less understanding. This time, we were raising another question related to Gallipoli‘s position on militarism in the Pacific. Our question related to the genocide currently happening in West Papua, which is just north of Australia and under a brutal occupation by Indonesia.

Gallipoli celebrates a story of ANZACs united in the struggle for freedom against an evil Empire that would eventually come home to the Pacific, if we did not push it back. Yet if that is what humbles us about World War One – then why isn’t Te Papa talking about the peaceful Pacific struggle for freedom we need to be engaged in now, in support of our West Papuan neighbours, against whom Indonesia has been committing genocide since 1969?

The fact that Te Papa isn’t talking about this issue at all (while these Wellington academics and Naenae college students are), suggests even more strongly that the Gallipoli agenda has more to do with glossing over colonialism and injustice in the name of glorifying the Kiwi male war hero, than it does with celebrating real freedom in the Pacific.

When Pala and I went to Te Papa with some coloured chalk to peacefully raise this important challenge, we were first met with lots of visitors who stopped, took out their phones for pictures, and asked us about what we were doing. We were grateful for this attention – it seems exactly the point of the museum as a public forum.

Eventually though, a security guard stormed over to me – he was pretty wild, for chalk. He blurted,

“We don’t want that rubbish here!”

I said it wasn’t rubbish, and asked him if he’d read any of it. “I’m not interested in what it says,” he said. “It’s rubbish.”

Okay – for what it is worth, I have done some postgraduate museum studies. My Masters thesis was on the practice of curating in postcolonial, national museums – I wrote it at Leiden University after an art history B.A. at Victoria. I’ve worked in the museum sector, and been to those International Council of Museums (ICOM) conferences – even got high on them. All that talk about the transformative potential of the public forum, the museum, which can be likened even to marae in their power to bind a community. About the awakening of minds to the most pertinent social issues and challenges of our time; the sparking of debate, and creativity. About culture shifting, and about story-telling to position ourselves culturally, historically and geographically. The importance of public engagement is always tantamount, even when, and perhaps especially when, it challenges the museum. Particularly a state-funded national museum. I’ve lapped up all of that.

So I said to the guard, “But this is a public forum.” Te Papa has a statutory obligation to provide a “forum for the nation”. The previous CEO, Michael Houlihan, might have thought that meant offering the public “a table where you can go and do interactive things” – but at that moment, Pala and I were taking active participation more seriously than that. That’s why we weren’t doing anything destructive, or criminal – we were chalking.

The guard asked me furiously, “How would you like it if I came to your house and defaced your property?”

Since when is Our Place your house? could have been a response to that.

“My house is not a public forum!” I said.

His ultimate response was to threaten to have us arrested. And to roll out a big, sloppy mop.

My most recent venture to Te Papa for some good ol’ public dialogue was in support of Peace Action Wellington (PAW) on ANZAC Day. PAW made two stunning plastic sculptures of World War One conscientious objectors (of whom the most famous is Archibald Baxter) to tie to posts at significant sites in the city so that they recreated Number One Field Punishment. That was the military practice of tying objectors or “conchies” to poles by their hands and feet for days and weeks on end, until they fell dangerously ill and their muscles atrophied. Baxter’s story (immortalised in his book We Will Not Cease) presents a powerful counternarrative to that which celebrates military leaders as the ultimate battlers for freedom.

The PAW team tied an Archie sculpture up along the waterfront, by Frank Kitts park; another on the City to Sea bridge. They looked incredible, and poignant – as journalist Tom Hunt captured on stuff.co.nz. Te Papa’s response however, was this:

Security hastily removed Peace Action’s work, whilst dishing out threats of arrest and firm opinions about what and who should be or should not be remembered on ANZAC Day.

The other remarkable thing about this, was the statement about Te Papa’s property boundaries – entirely different to that which Pala and I were shown after chalking. When we were being threatened with arrest for putting chalk on the ground, the guard told us that the Te Papa property boundary followed a curve from the large box sculptures on the west side of the museum, across the boulders on the south to the concrete wall. The flagpoles easily stand far outside of that, but by ANZAC Day the boundary seemed to have moved.

In any case – are the rules around engagement with Te Papa the institution so entirely different from those around Te Papa as property? And what does that mean for public engagement? Does it mean that we can only engage on Te Papa’s terms – keeping up with the events programme in case topics we consider marginalised have been ticked off and dealt with in there; colouring in at an activity table; answering a question on a designated visitors’ form, to place in a designated answer box; posing politely brief and tentative questions at floortalks – swallowing our disappointment if there’s no satisfactory response?

I had some response from Te Papa on ANZAC Day, to a tweet, which resulted in an online conversation with one of the curators, who mentioned the museum could possibly be interested in acquiring the big banner Pala and I smuggled into the museum in February.

I found that really telling. Te Papa weren’t interested in the banner when we hung it. I once had a chat with ex-Te Papa CEO Michael Houlihan who carried on about the importance of “collecting the contemporary” to “build social capital for the nation for the future” and “create a record for posterity”.

“So you might not see the exhibition for 20 years,” he said, “but then hopefully people will turn around and say, ‘Gosh it was really good that they collected that material 20 years ago.”

But we didn’t make our banner for posterity. We hung it on the day of the Trans Pacific Partnership signing in order to make important links between early twentieth century imperialism, and imperialism as it is today. We didn’t make it so that someone might don archival gloves and pull it out of a box in 20 years time, and talk about it then, maybe.

We made it to insist on important public dialogue, now. So if Museum of New Zealand Te Papa Tongarewa is interested in what we have done at all, let’s have the dialogue now. When it is needed.

There’s a Museums Australasia conference coming up in May, too. It’s called Facing the Future: Local, Global and Pacific Possibilities. It aims to “explore the relevance and sustainability of museums and galleries now and in the future, and the ways we can be of social, cultural and ecological value.” I hope that the sincerity of the museum sector’s dedication to real public engagement, including through its training of security staff, is raised as a topic of discussion the conference.

Because as the social, environmental and economic challenges we face become more and more urgent, so does critical dialogue, especially in and around our social institutions, and so does dissent. More than ever we need to invite and welcome challenges made to sanctioned histories and sanctioned narratives, especially those delivered by the national museums and galleries that claim to offer us a place of collective questioning, learning and transformation.

What do you think, Museum of New Zealand, Te Papa Tongarewa?

Will you welcome us next time – or will you call the police?

If you liked this article feel free to leave a tip.